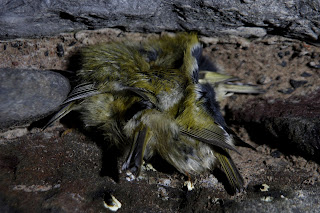 Migration Magic
Today its raining. Sometimes I like being out in the rain - but I don't fancy it today. Therefore, no nature notes from my urban idyll - not a fascinating start.
But, perhaps a chance to show you a rather lovely image of an event that took place whilst filming on the Farne Islands a few weeks back. I was there during migration time and one night literally thousands of birds started arriving on, or flying over, the island.
It would have been their first sight of land after 300 miles of sea as they escaped the cold of northern europe. With night approaching the temperatures dropped and the birds started to go to roost. There were blackbirds everywhere, fieldfare everywhere and most delightfully of all - goldcrests, in their hundreds. These tiny birds, weighing no more than 5 grams, had flown all the way over the North Sea in storm force winds and were totally exhausted. Too tired, even, to be bothered by humans. As a result you could get incredibly close to them and here you can see at least 4 of them all huddled together in the leeward side of a wall trying to keep warm in the bitter cold November night.
The warden on the island said he had never seen this huddling behaviour before in goldcrests. But other small birds like wrens roost together, so perhaps its not that surprising. This group were tucked in against the old lighthouse and I wonder how often that light house has saved the lives of birds giving them shelter as well as saved the lives of men at sea?
And getting back to the premise of this blog, humans and nature living together, I guess that thought is a nice place to end.
Posted by Richard Taylor-Jones at 10:25