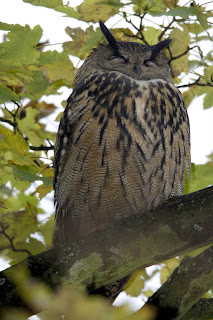 An Owl about Town
Whilst I've been sitting at home getting prepared to go and hunt down my local tawny owls, a very different owl all together has turned up in the heart of Bristol. An Eagle Owl.
This in itself, is very exciting, I believe I am right in saying these birds are the biggest owls in the world, but what's more, I've been asked to film it tomorrow night for the local BBC Inside Out team, with naturalist Mike Dilger. Excellent news. A wild Eagle Owl on the lose in a British City - this will be a filming first.
Whilst there is now a tiny breeding population of this species in Britain, it is still an incredibly rare sight and the owl is certainly not considered a native species. It's believed the population has arisen from multiple releases of unwanted captive individuals, used in falconry, not from wild birds arriving from over seas. Once again we human influencing the world around us.
There is no reason why the owls shouldn't do well here as they're found breeding from Spain to Russia and with a 6ft wingspan, if size matters, they'll certainly be out-competing our smaller British owl species for territory and food. This is a worry for some conservationists who fear they will cause problems for much of our native flora and fauna. Certainly conservation organisations like the RSPB and BTO have no intention or encouraging the owls already here, because of the disruption they may cause. However, many birders are welcoming a new addition to their UK list.
I'll be using the very latest infra red filming kit from the BBC Natural History Unit so expect to get some great images of this particular individual. Hopefully once the film is cut by the director I'll be able to put a copy onto the blog. I just hope it's there tomorrow night. Tomorrow's blog - if there is one - will be a late addition.
Posted by Richard Taylor-Jones at 15:39