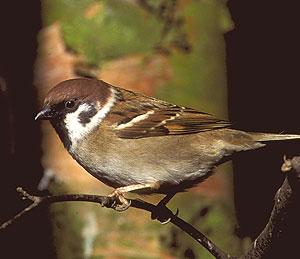 When I asked "where is your Accidental Nature?" a few blogs ago, one of my Twitter followers, @Englishfolkfan, suggested sewage works could be a great example. I hadn't thought about sewage works, but it seems reasonable to expect that with relatively large areas of green space, undisturbed by the general public, they could make great places for nature. Sure enough, it seems they are, proof arrived yesterday with a filming job from the Autumnwatch office.

This Friday I've been asked to go and film Tree Sparrows, at Beddington Sewage Works. The birds are in serious decline in the UK, numbers having plumeted far faster and deeper than the more widely appreciated decline in house sparrows, 87% in the last 25 years. The birds are traditionally farmland birds and their decline has been linked to re-production failure caused by a lack of insects on modern farms. The insects are vital for feeding the young as they will not feed on seed until more mature. As modern farms have little natural habitat for insects and use pesticides, chicks never make it out the nest as adults struggle to find them food. Eventually the breeding birds die with no young to succeed them and the population vanishes.

The adult birds have problems too.  They feed on seed and have probably taken a hit like all farmland species with tidier farms and very little winter stubble these days.  The cold months are hard to get through. Within the concept of Accidental Nature, you could argue that if tree sparrows needed winter seed crop provided by humans to flourish, then its not unreasonable to just suggest that if they don't do well when we stop providing them food, so be it, that is nature's way. Rather like Herring Gulls and fisheries discard. But, let's not forget that Farmland will have taken away natural habitat that could easily have supported the birds and those insects for the chicks would have been in abundance too. So, its not just a case of modern farming techniques, but long term eradication of suitable habitat by humans. In the first instance, the traditional farms may have a positive effect on numbers, but modern ones certainly not. So the accidental relationship between the birds and humans is not so straightforward then.

So, why I am I being sent to this sewage farm to film the birds? It's the wrong sort of farm isn't it? Well, it may be, but it seems a new relationship has started up.  Beddington has got the second largest colony of tree sparrows in the country, fledging well over 500 young a year. Why the success? Simple really, the sewage sludge is spread out onto large beds, on which all sorts of "weeds" flourish. (for weeds read wild flowering plants!) This type of rough unkept habitat, known as ruderal habitat, is full of weeds that will provide year round seed for the adult birds, and is home to great insect life too, ideal for the young chicks in the summer. So, the Tree Sparrows are thriving.

The film I've been asked to shoot revolves around some ringing research work that is trying to track this years chicks. For the full story, you'll have to watch Autumnwatch when one of the presenters will be off trying to find the ringed birds. Its a wonderful tale about Accidental Nature, sewage was never intended to help Tree Sparrows thats for sure. And perhaps if the trend of Tree Sparrows setting up shop in sewage works continues they'll become known as Sewage Sparrows, but somehow, I doubt it.

Keep your eye out for the story on Autumnwatch and if you want to know more now visit here...

Good morning Richard, for years there has been a large Heron colony by the sewage treatment works at Upnor on the River Medway.

Thanks Chris - I'll look it up!