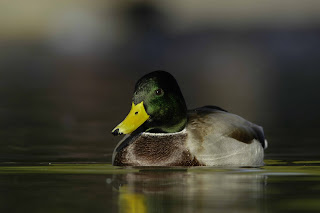 Owls On the Up, Ducks on the Down
I woke in the night to hear the tawny owls calling most eagerly. During the last few months they'll have been setting up territories for the winter and next spring. It appears they're now either still setting up, or very busy defending, the territories, as the hooting went on for some time.
I take all this racket as a very good sign because every year we hear this fierce owl hooting competition and that can only mean there are plenty of owls out there. Tawnies are the most common owl to be found in the urban environment and they certainly flourish down in Snuff Mills' woods! I need to find  a red filter to go over my torch and then I shall get out and use my recording to call them in and have a good close look at them.
I went for a walk along the river again today, with my mother who is visiting, and a fresh otter spraint was on the tree. The kingfisher was also present and on watching him I decided he seemed unsettled, constantly moving his position. At the time I took this to mean he was struggling to see fish in the somewhat murky waters (its been raining and the river is running fairly quick and therefor its turning up sediment making it hard for the birds to hunt). But, I bumped into a friend, Ian Llewellyn, who is studying the birds in great detail for a book, and he has been told there have been two kingfishers constantly battling along the river, so perhaps the birds unease was more to do with territorial dispute than hunger? I would like to witness these fights and the garden of one of the houses backing onto the river is apparently an ideal spot to watch it. I shall have to ask the owner for a ring side seat!
Further up the river, where the valley turns from Snuff Mills into Oldbury Court, there is a stretch of water where invasive bamboo has lined the banks. There are always a large number of ducks present here, mallards and mallard hybrids. I think they take shelter in the bamboo to great effect, so whilst it is unusual to see this plant, it clearly does the ducks no harm. And mallards are declining in this country, a little known fact. So if the bamboo helps them - then it may as well stay.
On this occasion the ducks were being chased by a dog swimming in the water. The dog's owner had thrown a ball in amongst the ducks for the dog to chase and unsurprisingly, once in the water, the dog decided chasing the ducks was more fun than getting the ball. The dog's owner clearly found this most amusing. It perefectly underlines my comments previously about human disturbance on the river and how it must effect the wildlife here, particularly the otters. If ducks are being chased, an otter would be hounded. I wish people could afford some respect to the wildlife who's home they are visiting. It is, in so many ways, why they enjoy going there. Perhaps I should have said something to the man, but I didn't.
My last note for the day was on spotting a pair of Little Grebes. They live around an island in the river, a favourite haunt for much of the river wildlife as it provides some sheltered parts where humans can't disturb. I think they bred hear last year and  I hope they will again in the coming spring.
Posted by Richard Taylor-Jones at 16:23