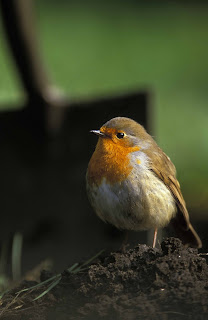 Nature, Red in Tooth and Claw

If there is one little bit of nature I am seeing everyday at the moment during a bit of office based work then it's the robin in my garden.
There are few birds in Britain that have created such a strong connection with the inhabitants of our islands as the Robin has. As Christmas approaches one feels this more keenly than ever. I’ve seen the birds popping up every where from greetings cards, to adverts and even in the script of the short film I’m writing for the One Show. Also, there was a fascinating interview today on Radio 4 about the birds revealing some of the myth and mystery surrounding them. It attempted to explain why they have worked their way into our affections. Have a listen if you have the time.

I’ve photographed robins on a few occasions including in my own garden, but undoubtedly the most memorable occasion was for the BBC. They wanted an image of a bird showing how aggressive these family favourites can actually be when defending their turf from rivals. The idea for the shot was to capture how aggressively a wild bird would react to a stuffed one, would it be enough to get the bird going?
So, a stuffed robin was set up in a wild birds territory. The bird immediately flew down to face his rival and, within seconds, it practically pecked the poor inanimate object to pieces. It was quite a site watching what is probably Britain’s favourite bird behaving like a crazed serial killer. I was mightly impressed by his plucky performance and got some magnificent shots. I wish I could find those photos but they elude me at present. Instead the cute looking shot from the garden must suffice.
So, when you see that lovely little red breasted fellow feeding on your bird table or beaming out of your latest Christmas card – just remember all those warm cute and cuddly feelings are entirely a human concept. You’re staring at a bird who will fight to the death to help further his lineage. Its nature, red in bill and chest.
Posted by Richard Taylor-Jones at 19:33