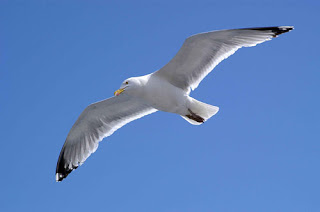 Much of our accidental nature turns people off, Herring Gulls in our urban environment is one example. Many people find them a loud, noisy and even aggressive intruder in what we want to be "our" world. Many animal lovers also mourn the herring gulls decline from its natural habitat to this grimy urban one. But do the gulls worry about any of this. No they don't. They just get on with it. They are after food, shelter and somewhere to reproduce. If we offer them those things they will take it. And think about it, back at the coast where they "belong" why were number so high? Because of fishing boats and the discarded fish they feed on perhaps? Is it any wonder as the number of fishing fleets in Britain crashes that coastal gull numbers are declining and rising in urban areas, especially at landfill sites where we throw away more and more "rubbish". Its likely we have been accidentally effecting gull populations for centuries and the gulls are simply following us and our accidental food offerings about. Once landfill sites close, which they will in 10 years or so, what happens to gulls then. Even more in our towns and cities as they raid our garden bird tables and over flowing dustbins? A massive crash in population? I don't know. What I do know is that gulls and humans have a long lasting relationship. Population Up or Down, is it right for us to interfere or do we just let the accident of gulls and humans play out its course, after all, accidents happen.
Posted by Richard Taylor-Jones at 20:37