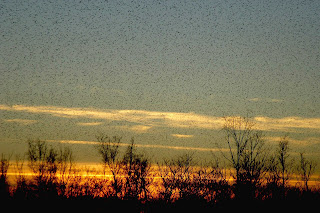 Superstar Starlings
When I very first started in wildlife telly, on work experience at the BBC Natural History Unit,  I was sent out as a field assistant to help a new young cameraman called Charlie Hamilton-James. Charlie had been given the task of filming starlings going to roost at Shapwick Nature Reserve. I had no idea that starlings roosted in large numbers and certainly no idea that they performed an amazing arial display in the process. Charlie and I set up and waited for the show to begin, totally alone on the reserve. Not a sole to be seen or heard. And that's how it stayed for the duration of what I found to be one of the most awesome events in British natural history.
How things have changed in 10 years. Firstly, Charlie is no longer a rookie cameraman. He's a multi-award winning global name in natural history broadcasting. Secondly, if you go to Shapwick, as I do every winter, and as I did today, you certainly wont be totally alone on the reserve. Watching the starlings here seems to have become a spectator sport. Dozens of cars blocked the road at the reserve entrance and what seemed like hundred of people were wandering the paths looking for the first signs of the birds arriving. Starlings, it seems, have become superstars of the wildlife world.
Undoubtedly, TV has a had a huge part to play in this. Bill Oddie is the main the culprit for bringing the wider public attention to the birds annual winter show, along with Carling Black Label, who used the footage shot for his series to advertise their beer. Now it seems everyone knows what these birds get up to before bedtime - and they know where to look. Shapwick and the nearby reserves of Westhay and Ham Wall all play host to one of Britain's best starling roosts and at the weekend you can guarantee a huge audience.
When this wider interest first started, and I found my private annual pilgrimage had become so very public, I was really quite upset. I enjoyed watching them in the solitude of wilderness. But I make wildlife telly. I do so to educate and inform. Getting people to watch starlings is exactly the sort of result I should be enjoying. And now, I really do.
Today it was great to see toddlers to OAP's all out to witness one of nature's great events. The excitement was palpable in the air - all because of birds. These people had been sucked in by the wonder of nature and will now go out into the cold of a December evening to experience it. I hope these people will all want to protect something they've become so enthralled by. It's brilliant and I genuinely hope it helps.
Except it wasn't quite brilliant for me. My family and I had entered at the wrong end of the reserve. The birds had decided to roost towards the eastern reed beds and although visible due to their vast numbers, well into the millions, we didn't stand a chance of reaching them to experience the display close up. However, one large flock of several thousand did fly right overhead and come to roost a few hundreds yards infront of us allowing me to grab one image of the sky filled with feathered bodies flying against the setting sun. Within seconds the birds had flown down into the read beds to roost for the night. It wasn't what I had hoped for but it doesn't matter. As long as these reserves remain protected by the support of all those people there today, the birds will be back and so will I.
Posted by Richard Taylor-Jones at 21:18