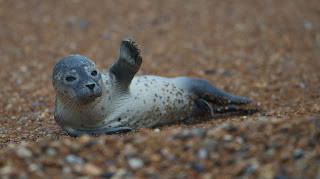 OK, so there's not much "accidental nature" about this story, but if a seal pup gets washed up outside my house and i snap a photo of the addorable little thing, how could i not share it.... And getting washed up was an accident on its behalf - so hey - why not!

It's Common Seal breeding season around the UK coastline and sadly that means an awful lot of young common seals will be found washed up along our beaches. Unlike grey seal pups born in the Autumn (who are largely encouraged to stay out of the water for the first 3 weeks of their lives) common seal pups are expected to swim within hours.

Common seals will often pup on tidal sand backs, just like the Goodwin Sands off Deal where i live. If the mothers don't keep an eye on them, or the weather is bad, when the sand banks get covered by the tide, its very easy for them to become seperated in the waves. The pups are washed away, can't fend for themselves and starve or drown from exhaustion.

This one pictured must have swum some 4 miles or more from the Goodwins over to the mainland outside my house, and is clearly just a few days old. It should have a good rotund barrel like shape with no neck, but is clearly undernourished and in desperate need of a feed. It was struggling to haul itself out of the surf and clearly didn't want to get back in the water - it was exhausted.

There is a strict code to follow with these events. You should never try to approach the pup or pick it up. Wait to see if the mother is close by, sometime she will be, and you standing about watching is keeping her away, so stay well back. If she doesn't return its time to call a marine rescue centre - the British Divers Marine Life Rescue is a good one... www.bdmlr.org.uk. An expert will come along and assess what needs to be done. In this pups case, its was definitley a question of drowning not waiving! If it had gone back into the sea I don't think it would have lasted the night. So, Alex from BDMLR carefully crept up un the seal, which I was distracting by waiving my jumper about, and then she jumped on it with a towel. Safely wrapped up it was put into a carry case rushed to the scene by another on-looker Jeremy, who had made the call to the bring Alex in.


The pup will have to go all the way to Hastings, the nearest marine life resuce centre to spend a few weeks putting on weight and being prepared for release. I've filmed pups in sanctuaries before, but i've never been involved in helping with a rescue. This little pup must be a fighter to have made it so far to shore, lets hope he makes it OK to Hastings and gets through his weeks in captivity to swim another day. If i ever get to see it again, I hope it'll be waiving, not drowning.

Posted by Richard Taylor-Jones at 22:54

Just dropped the pup off at Mallydams, she overnighted at Burnham House vets in Dover where she was given some lectade, and is now settling into her new pen (looking a lot smaller and subdued than she did in the cage!). Will get an update on her Tuesday and will let you know how she's getting on if you'd like?
Lyn
BDMLR

She is likely to be at Mallydams for a few months until she gets to that rotund barrel shape. Thanks for your help last night Richard, I needed someone to distract her attention away from me so the jumper waving worked a treat!