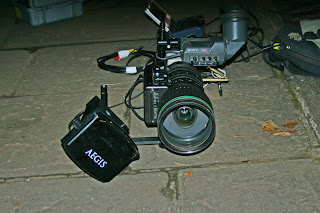 I got an Oscar
Oh. My. Word. What a wonderful evening I've just had. If Wilderness City is a blog that's not only about wildlife, but is also a place to consider how the boundaries between nature and mankind are completely entwined and interlocked - then filming Bristol's Eagle Owl has hit the spot.
The bird put on a tremendous display. Firstly he sat nicely in his tree opposite Bristol University's Biological Science building, asleep to begin with and then throwing a few fierce glances here and there at passing gulls. Then, as night fell, he began to get going.
First off, he coughed up a pellet. A pellet will contain all those bits of an animal a birds eaten but can't digest - like the fur and bones. It was a nice moment to catch on film. Then, once he had had a stretch, he flew to a nearby chimney pot, where he proceeded to perform a full mating display! This consisted of cocking his tail, arching his back, sticking his wings and neck out and then calling incredibly loudly for several minutes. As he called he bared a white throat patch, advertising to any nearby females that he has a prime bit of real estate and the ability to defend it. It was an amazing thing to watch in Britain, let alone in a city.
So, what do we have here? A wild bird blown over from the continent that's set up shop in a city? A captive bird that has been released? A young bird from Britain's tiny breeding population that has fledged and decided to set up home in the middle of Bristol? Well, we are unlikely to ever know the answer. But, what we do know, after tonight, is this bird, wherever he is from, is behaving like a wild bird, very at ease in his new environment. Wilderness coming to the city. Wilderness created in the city. Who knows.
Chris Sperring, one of the UK's premier owl experts, joined us on the shoot and is not in the least bit surprised at the owls success. With all the food outlets, rubbish bins and therefor rats, its hardly surprising the bird is eating well and flourishing. He believes the owl may well stay for some time. It has, apparently, already been in the city for three months. Whilst its incredibly unlikely for the bird to find a mate Chris felt you should never say never, after all, no one ever expected a male owl to turn up in Bristol so why not a female?
The students at the University seem to have become very proud of their new friend and named him Oscar. They say people have started coming from all over Bristol to look at him and he is galvanising a real common interest in wildlife in the city. Whilst some conservationists worry about this species invading and upsetting our native fauna, having witnessed Oscar in action, I can't help but believe this particuar magnificent bird is an embasador for natural history in the city. He's helping create a connection to nature for people who find it hard to find the time to experience it elsewhere. Tonight was a real highlight of my wildlife year and I sense I wont be the only one to feel the same. Oscar may struggle in his mission to find a mate, but, unwittingly, he is a huge success in the quest to bring wilderness and city closer together.
N.B. The film will be broadcast on the evening of Jan 14th on BBC 1's Inside Out. As soon as I can I will put a copy of the film on the blog.
Posted by Richard Taylor-Jones at 22:02

Remember me? I worked with owls at Muncaster Castle. I think we met through Spring Watch, or Nature's Calendar, or one of those series!

Found the link to you through Chris Sperring who is a good friend of mine.

I'm moving on to a new exciting project soon. Have a look at my blog!