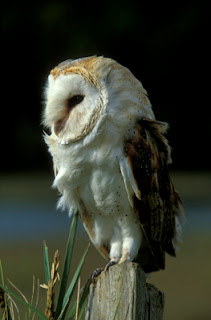 Over the weekend I've had the chance to catch up with some old friends, James and Sally. They live on a farm a few minutes down the road. When we got talking I discovered they had an old guest back in town, a Barn Owl.
I've been thinking about doing some filming on the farm and news that they've a resident Barn Owl again has added fuel to the fire. You see, I love the Barn Owl. An old painting of the bird with its wings outstretched used to sit above the fire place in the sitting room when I was a boy. As a young child, who had never seen such an animal, it looked a big and impressive beast. That iconic image meant the birds have always been a big figure in the landscape of my wildlife imagination. And, of course, they've been a figure in the wider human landscape for a very, very long time indeed. Right back to when humans very first started building the structures from which they get their name.
They do fit the Accidental Nature mould so well, even if in a very ancient way. Here was a bird that nested in holes in trees or cliff faces and fed on small rodents. Along came humankind, who, through farming, created lots of sheltered holes in sheltered places (barns) and near these holes humans were farming grains, which attracted rodents on which the birds could feed. It was a perfect accident for the owls who became so commonly connected to these buildings that they became named after them, in Britain at least.

This should have been seized on by farmers as a good thing, because they wouldn't have wanted the rodents feeding on their crop. But one of the many other names given to Barn Owls is Devil Owl, and they were often percieved as omens of doom and shunned away. It took many centuries before farmers recognised the birds usefulness and duly started to actually leave holes in their barn buildings on purpose. I didn't realise they did this until filming on Exmoor in an 17th Century barn and having the Owl Hole pointed out to me by the farmer. It was part of the original design and sat just under the apex of the eves, ideal height for the barn owl to fly in and out of the roof where it would nest. An owl family had been in residence there for as long as the family could remember, way back for generations. I guess it was at this point in time where the relationship stopped being accidental.

The species flourished, as it has done so across the world, and it is one of the most widespread bird species on the planet. I am sure this global success may well have something to do with the continued success of the species to which it is so closely linked - us.

Of course we have played a negative role in the birds' history in this country too. As we developed poisons to kill rodents and farming became more efficient the rodents became less of a trouble and so the importance of the owls as pest controllers dropped. They also suffered from eating rodents who had eaten poison (secondary poising) as well as the troubles with re-production caused by DDT in the 1960's. Genreally farmers stopped worrying about providing nesting places in barns and all in the Barn Owl no longer had the ingredients it needed to flourish.

These days of course the picture is rosier, but not by accident. There has been a huge push over the last few decades to help barn owls spread back across Britain and many farmers have had visits from conservationists asking for permission to put up Barn Owl Boxes on their land. The birds have responded well and whilst I don't think there is any danger they'll be called Box Owls, the relationship between mans activities and owl numbers is clear again, only this time its no accident.

What I love about Barn Owls is that we think of them as being part of the essence of nature. And yet, if you consider Accidental Nature, they are also the essence of the effect humans can have on the landscape. A positive effect. A symbol of humans as part of nature. They are, I think, very significant species indeed and I am looking forward to getting out on the farm to watch them. I'll let you know how i get on with filming these oh so ancient accidents.
Posted by Richard Taylor-Jones at 20:39

Really cool pic, how you guys do this?