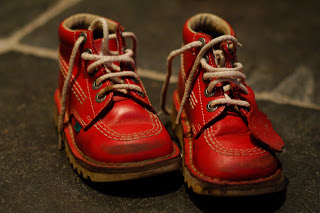 Sonja knocked on the door cursing and swearing this afternoon. Finbar had dog poo all over his shoes and had been sitting in the car, so smearing it all over the car too. I was duly given the task of taking my sons shoes off at the door and taking them to the sink for a good clean. Whilst Sonja went off to the car with a disinfectant spray and some kitchen towling, cursing careless dog owners, I got a whiff of the offending excretia and realised some mis-identification had been going on. This was not domestic dog poo – this was wild dog poo – fox poo to be precise.

Being January, it’s mating time for foxes, and they like to go around their territory pooing in important places, so marking out their patch from any intruders. It just so happens that next to where we park our car is an old grit container behind which Maureen, our next door neighbour, puts meaty scraps out for the fox. A habitat that has spread down the road so that now several households, including mine, all put out foxy food when they have it. The local fox population has obviously got to know this spot well and I guess somebody in his furry wisdom last night decided it was in his patch and he wanted the local ladies and challengers to know. So he did a big poo right by the grit bin and hence right by our car – it was an unwitting three and half year old getting in that car a few hours later that stood in it, thus bringing the foxes seasonal behaviour to my attention. Well done Fin, Fox Detective.
Posted by Richard Taylor-Jones at 16:46

Hey Richard, how're things?
I heard that we're not getting the pleasure of a visit from you this spring but that we might be seeing you in the Autumn. Hope all goes well in a couple of weeks time, we're getting set for the "big event" now!